Today I found some mad plumbing skills that I had no idea even existed.  With the help of my dad and brother, and after about 6 beach towels and the now multi-functional large plastic popcorn bowls, I fixed the plumbing problem that I myself created.

I started out the day with much different intentions than being a plumber.  I was cleaning out the refrigerator and was going to move on to packing up some things and clearing out some clutter.  So I was emptying out bowls of what used to resemble food.  There was corn, roast beef, rice and something that I think was spaghetti sauce.  My garbage disposal was on full munch mode when I noticed the water backing up in both sinks. Ah crap.  I looked under the sink hoping there would be a blinking neon sign that said "Here is the problem."

Normally I would wait for the hubby to come home so he can pretend to use his plumbing skills but he is out of town this week. (I hesitate making that public knowledge, incase there are any crazies reading this who want to take advantage of my situation.  But let me warn you I have a fierce dog that can almost catch rats and I have seen every episode of ALIAS, and in my mind, I can kick some serious butt). So I did the next best thing...DAAAAAADDDDY!

Yep, I called my dad.  At that point I thought it was just a clogged garbage disposal.  So within 30 mins. Daddy was there with a tool.  He would fix everything.  Well with his tool he determined it was not the disposal.  So then, after emptying the water out of the sink he unscrewed some pipes.  No clog there.  He determined it was further back in the pipes in the wall.  Great.  I called the plumber.

Shortly after my dad left my big brother, who lives over 500 miles away, called.  This was not abnormal. He is nice like that.  Being the huge do-it-yourselfer that he was I started picking his brain about the clogged pipes.  Did I have a snake he asked?  Well we have a corn snake that we feed dead mice to, but  that is not what he meant.  I found our plumping snake thing and with my brother still on the phone, unscrewed the piped under the sink, got drenched in gross water and shoved it in.  Okay.  Now what? I screwed the pipes back together and turned on the water. Still clogged.  Then my brother mentions a plumbing balloon that he uses. 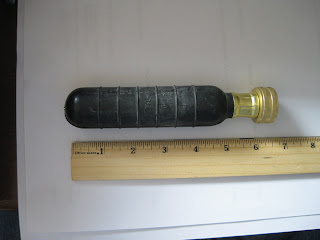 Plumbing balloon.  Or as I called it, the Water Weenie.
Yea I know what it looks like.  Go ahead and giggle and then get your minds out of the gutter.  So being home bound with two little boys and no babysitters I once again called my dad.  He went to Lowes for me and showed up awhile later with the phallic symbol that would unclog my pipes.  First I had to bring the hose in through the heavy trafficked doggie door.  I screwed the weenie on the end of the hose and shoved it in the pipe as far as it would go.  Then we turned the hose on.  The balloon inflates with water, and then shoots a very high powered stream of water out the end. (Yes, there is a hole in end.  Stop giggling).  Okay.  Was it working?  With my brother on the phone, Dad went outside to turn the hose off.  So with the water off the balloon deflates and all the water we just sent into the pipes shot out at me like Niagara Falls.  There may have been screaming and cussing.  I now had gross pipe water all over me and an inch of it all over the kitchen floor.  Enter the beach towels.
Then my brother suggests calling a plumber.  Thanks a lot.
So flash forward a couple of hours.  My favorite plumber has not called back.  But my brother does.  He asks if there was a pipe on the outside wall close the kitchen sink.  I have only lived here 8 years how should I know? Why by golly there was!  Now what?  I found a large pipe wrench and screwed off the end of that puppy.  Out came the foulest smell and gook.  My brother suggested I just shove the hose in to see if I could flush out the clog.  So I did and out shoots more gook and some RICE and pieces of ROAST BEEF.  All. Over. My. Patio.  Nice.  But it wasn't quite unclogged.  So I called my dad who had taken the balloon home.  The saint that he is, he came back.  Once again, there was screwing and inflating with water.  Voila! The water flowed and did not come back out like a backed up dam.
I DID IT!
Yea the whole job took about 8 hours from start to finish but I saved some money and never had to see a plumbers crack.  Nor did I have to bare mine.  After cleaning up food off the concrete, washing 6 beach towels, and putting my kitchen back together, I felt a sense of satisfaction.  Who needs a man anyway? Except for runs to Lowes and about 4 phone calls to by brother I am sure I would have figured it out.
Eventually.
Linda
Posted by See Mom Smile at 12:15 AM

YEA!!! What an accomplishment!! What a Dad and Brother!! Hubby owes you a dinner on this one!!

Ok, I am totally impressed with this one! WAY to go! You are my hero!

you rock girl. of course, if I ever visit I'll be sure to bring my own towel... and popcorn bowl :)

I'm pretty sure you deserve a day at the spa for that!

Good thing you had beach towels and those trusty handy dandy plastic popcorn bowls to save the day!

How awesome you got it figured out and fixed....way to go!

Just perfect for the single gal, I'd say!

PS - Does that phallic symbol also take out the trash and give foot rubs??

Good for you! I can totally change the oil in my car, but I draw the line at spewing roast beef and rice.

Wanna hear something funny? As I was reading this I heard a drip drip drip behind me and looked to see water leaking from my swamp cooler vent onto the new carpet. Ironic? So Master Plumber Linda, how do I fix it??? LOL!

Um, all I saw was a normal eight inch long plumbing tool and then YOU said PHALLIC and all HE$$ broke loose in my brain! Thanks a lot.

You are da woMAN!!

You are my hero! I wish I could have been there....to watch. I only giggled once - for about five minutes.

What is it with plumbers and phallic-ness??

There's a part in the tank of the toilet, you know the one with the arm, that lifts and clogs the hole at the bottom? Go into a Lowe's or Home Depot and ask them what where it is, and if they could please tell you the name of it!

Water Weeney! You kill me. I was giggling like a 12 year old girl. LOL. And my 12 year old girl and my husband are looking at me like I am totally crazy. You tell a good story. And you are my hero now. You are woman! Here you roar!

Good for you. Glad it all came out. Ha ha. I am glad you didn't have any pictures of all of this.

First the rat and now the sink, we hope you get to use the bowls for popcorn one night! Thanks for making us laugh!

Yet another reason I need a best friend like you. My last clog cost me $450 bucks. Stupid plumber!

Oh and don't ever clean out the fridge. I learned that lesson, too.

Best advice is do not think OJT is the only way to learn Plumbing. Watching someone else is ok but how do you know they are doing it right?

I would like to thank you for the efforts you have made in writing this post. I am hoping the same best work from you in the future as well.
Plumber Alabaster, Al

That sludge in your basement might be from miles away, a treatment plant, or a manufacturing facility that deals with hazardous materials. Let us handle it. We have the know-how, trained staff, and proper gear and equipment.Water Damage Restoration Company

If you have any desire to move beyond goldfish and guppies and into the exciting world of saltwater reef aquariums, you are going to have to tackle the basics of plumbing your aquarium. Plombier Vaudreuil

There are many types of plumbing services in your neighborhood or area but it always seems too hard to find one when you actually need it. Plombier Saint-Léonard

Very efficiently written information. It will be beneficial to anybody who utilizes it, including me. Keep up the good work. It's stimulating game sims 4 cheats allow you to stop sims and objects from become stuck or trapped, so there's a practical use too them