I have held it in long enough.  I am so tired of this "historical" week in politics.  You can't tell me he would have won if he wasn't black, especially after how he has been promoted to "messiah" since he has won.  The first time he uses the toilet in the oval office the press is going to take a picture of it and call the it the "historical first crap" (pardon my french).  I have no respect for "that one" , for his policies, his associations and his disdain for our military and the constitution which he called "a charter of negative liberties."  I can never support a man who voted against a bill which would save aborted babies who were still alive, a man who said he would not want his own daughters to ever have to live with the mistake of an unwanted pregnancy.  I can never support a man whom our enemies are thrilled to have in office.  His supporters are worse.  I'm sure most of them don't even know what socialism is and why it is a negative term.  As one supporter said, with him in office "I won't have to worry about putting gas in my tank or paying my mortgage."  Yes, he will take care of you all right.  Just ask the Cubans how well they are taken care of.
Now I was not in love with the idea of John McCain, he is not conservative enough for me.  So he brought Sarah in, whom people either loved or hated.  I love her conservatives values and what she has been able to accomplish in Alaska, but I also think a mom with 5 kids and all their diverse needs should spend a little more time  at home.  I would have been much more happy with Mitt Romney and he probably could have beat "that one."  The Republicans blew it because they could not find their audience.  Still half the country went with them, but they could have had more.  If there had been any real journalism done and reported on the new president he never would have made it.  The mass media elected him a long time ago.  It was much more important worrying about Sarah Palin's wardrobe and Joe the plumber's tax return than to ask to see  B.O.'s proof of US citizenship or what he actually means by "citizen militia."
He won for all the wrong reasons.  He won because he is black, because he was not a republican, because it was cool to vote for him, because his supporters don't really know his policies.  I think they are all going to be in for a surprise.  And if Oprah doesn't shut up I am taking her off my TIVO.
Posted by See Mom Smile at 8:29 PM 4 comments: 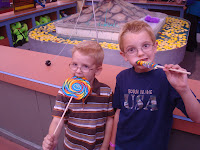 A couple of weeks ago we took the entire family to the Circus Circus Adventuredome for Jared's 4th birthday.  It is fun, loud place with lots of rides for the big and little.  We rarely get to spend an entire day together as a family and the question before we do anything like this is "is Daddy  coming?".  Yes Daddy is coming.  We were enjoying a fun, uncrowded day and didn't even mind the rides closed for barf clean-up (we were glad that they took time to do that).  Robert and kids enjoyed  making faces for the camera on the roller coaster and all was well with the world.  Then we hit the bumper cars.
The whole family piled in the cars, the little boys having to ride with their parents. Jared with Dad, and Colton with Mom.  We were all zooming around at a good pace when Robert,  turned Mario Andretti, hit Linda and Colton in the side at break-neck speed.  Colton's glassed went flying off his face and onto the ground into the line of traffic.  Luckily the sharp eyed guy at the control box saw the glasses flying and stopped all the cars.  He retrieved the glasses for us and they were once again sitting crookedly on Colton's face.  That was stop #1.  We were once again driving around when the cars came to a stop.  I see Jared crying and being carried.  Robert had hit Makenzie's car very hard (do we see a common element here) and Jared bit his tongue.  Because someone was hurt, everyone had to exit, the manager, security and maintenance were called.  Robert had to sign a statement and the cars were at a stand still for about 10 mins. Meanwhile Jared is sucking on a popsicle with a bloody tongue.  The rest of the day proceeded without incident but I think the Vance's are officially band from the Adventurdome Bumper Cars.
Posted by See Mom Smile at 2:39 PM 2 comments: 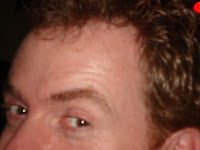 Driving down the road with   my husband and lots of kids in the back (as always).
We saw this sign to announce " National Disability Awareness Day".
My  husband said, "Oh, Mothers Day".  I am so loved.
Posted by See Mom Smile at 6:46 PM 2 comments:

Yesterday as I was driving my kids home from school and listening to "The Bee Movie" for the umpteenth time I realized that I had never actually seen the movie. I listen to movies almost daily in my car as I chauffeur my kids around but a lot of their movies I just have not sit down to watch. Unfortunately most of my families movie time is in the car. And since I am usually the one driving, I have decided it is safer for most of us if I don't watch (though my husband thinks he has mastered the watch and drive, which I clarify here, HE HAS NOT!). When we first got the big mormon family suburban with the DVD player I was planning to not let my kids watch movies unless we were traveling. That seems funny to me now. I have justified that since I drive to and from my kids school which is 15 min away, which is a 30 min round trip, which is usually twice a day, five days a week, 9 months a year for the last five years. If my calculations are correct that is 180 hours a year. That is the equivalent of a few round trips to New York and back. And that is not counting the trips to lessons, the church a few times a week etc... I think with that kind of driving time, me the driver deserves to have her passengers entertained.
At first we had earphones for the kids and I got the radio. Well the kids quickly displayed they were stronger than the earphones and they went to broken electronics heaven. So now I get the earphones to my IPOD and portable radio while my kids get "Enchanted" in stereo. You know it is bad when the 4 year old can't go on a 5 min drive to the store without wanting to watch something. And sometimes I let him. Remember when drive in movies were such a fun outing? The novelty of sitting in you car and watching a movie and listening to it on really bad speakers? Well in my car it is no longer a novelty but a necessity for this mom's sanity.
Posted by See Mom Smile at 11:22 AM 1 comment: