It's Up to You New York, New York

While at college, pursuing a higher education, she was watching MTV.  I don't allow that channel in my house, but my daughter is 19 now and on her own and making her own crap reality show choices.  An ad come on saying "text this number now for a chance to win a trip to NYC."  Yea right.  Without her mom's pessimistic voice in her ear, she did it and then forgot about it. 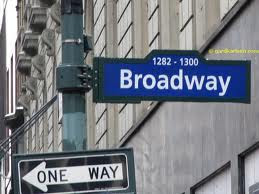 One month later she received a phone call saying she won a trip for two to NYC and the chance to win up to $100,000 in a texting competition.   Yea right.  She called me excited but we were both skeptical.  This is something that only happens on Oprah but not to us.  Low and behold two weeks later she gets a fat envelope with details and a contract.  What the what? And because I have not cut the umbilical chord completely, she asked me to go with her on this trip.  Ummmmmm YES!

So crazy as it is, while we were spending money on tuition and bigger dreams for our first born, she wins a trip to NYC to be in a texting competition.  And as you read this we are on a plane to the city that never sleeps.  I have typed up four pages of instructions and schedules for the household while and I gone.  It only takes a small village to replace me for a few days.

To come out with the prize money would be nice but the sooner she is eliminated from the texting fray, the  more time we will have to pursue tourist and shopping goals.  We could actually sit and watch Broadway shows for 4 days and be in our own little heaven.

What strange circumstances and an amazing opportunity to be with my girl who has lived out of the house of the past year.  And to share NYC together is going to be a thrill.  I hope.  I am praying we don't get mugged or lost.  Or both.  Or become the subject of the next Law and Order: SVU.  I am calling this our "Text and the City Tour."

If she makes it to the final 8, you can watch it live at 1pm EST on  this Tuesday, Sept. 21 at  Livestream.com. We may be there or we may be at the top of the Empire State Building by then.

Linda
Posted by See Mom Smile at 1:03 AM

text in the city tour is hilarious. Good luck! Hope you enjoy your trip however things go.

That is hilarious and awesome...at least she is applying herself...to something! LOL Great work! Have fun!

Fun Fun Fun! It's always "someone else" who wins those fun trips - sometimes I wonder if anyone wins them at all.
Very cool and it couldn't have happened to a nicer mother and daughter.
NYC is fabulous! Have a Super time!!!

LOVE your Text and the City, so clever.

Seriously, how awesome for you and your daughter. I love New York so much. And just stay in the main part, you'll never get mugged, it's really a rather safe place...I promise!!

My friend is there RIGHT NOW to tape the Nate Berkus show. So clearly, awesome time to visit the city.

Can't wait to hear all about your adventures.

Lesson learned: obviously blogging at 1AM in an excited yet sleep-deprived state before a flight is hazardous to one's grammar!

Holy cow! This is awesome!

I wonder if I could win a judging competition?

How fun (and random!). Good luck--and have a GREAT time!

Shoot! I was totally going to make my comment in txt form. And the first person already did it. Oh well.
It's still really cool. Can't wait to see the posts on this adventure!!

Lucky girls.....literally! I'm hanging on the edge of my seat waiting to read about the rest of the adventure..I'm staying tuned!

I love NYC. Hope you're having fun. The weather has been fantastic!

This is the strangest and coolest story I have heard all week. I love New York! Enjoy it.

Wow! That really happens to people?! Cool! How far did she get in the tecting competition?