Moms go through a lot of rites of passage or in other words, we go through things that earn us the invisible gold star or the agony of defeat medal.  Things like giving birth  (no biggie),
nursing (sore much?), changing diapers and wiping things off your kid that would make a dung beetle shy away.  And those are the FUN ones.  Taking a kid to get shots or to his 3rd drivers license test or dropping  them to their first party, with a big zit on their nose.  Yea, that's fun.  Harder for me has been letting my kids become adults and make their own stupid decisions.  And yes, they make them.
It hurts like hell and you are suppose to love them anyway, when all you really want to do is kick them in the butt.

Mormon moms have another rite of passage.  One that we should be prepared for.  But it hurts like hell.  And it's a good thing.  Our little boys and girls, when they are 18 or 19 respectively,  can choose to accept a calling as a full time missionary for 2 years for men, and 18 months for women.  Yes, I did it, in Oklahoma.  I learned a new language, Okie, and learned not eat anything that was once in a small cage.  And I grew up.  My hubby served in Chile.  He learned Spanish and unfortunately ate everything.  And he grew up. For the most part..

For my man/boy, it was not a hard decision to be a missionary.  We went through the motions of doctors appts., shots, interviews,  and then waited. As a mom it was an extremely vulnerable time, putting my sons next two years in the Lords hands.   He could be sent ANYWHERE.  We have no say. Just lots of prayers.  While you are secretly hoping for him to be sent to Boise, Idaho, he is dreaming of the more exotic.  Well, Atlanta, Georgia Spanish speaking is as exotic as it gets for him. The south like his mama, Spanish like his dad.   We could not be more thrilled.  But then it was time to say good-bye.

The feeling you get when a kid leaves home is that things will never be the same again.  And are they ready to live without their mom?  Who is going to remind him to shower and brush his teeth?  What if he feels hungry? Will he remember to eat?  Does he know to wash his sheets at least once in those two years?  And if he doesn't do any of that it will be my fault right? So much mommy guilt, so little time.  So along with him, I had to let it all go.  He was going to be fine.  Me? Not so much.

As he walked away from us, with nothing but a smile on his face, leaving his family in the ugly cry, I felt a piece of my heart walk away.  I never knew a mom could feel so much pride and so much sad at the same time.  And it happens to hundreds of Mormon mommies every week.  There is a silent, and sometimes not so silent club of moms full of pride, hope, worry, and sadness.

My best friend for life, sent a daughter off  to serve on the same day as we said good-bye to man/boy. The text I got from her said, "that sucked, meet you at the ice-cream shop."  So we experienced our rite of passage together, eating ice-cream, and crying. 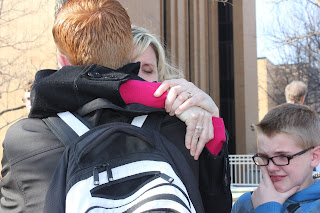 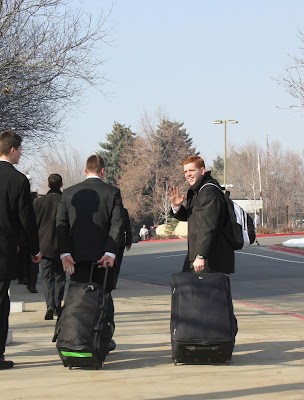 I'm crying right now. I have all those worries and I still have 2 years before I face a departure. Thank you for your post, you're awesome, Linda. Love, Steph

It's the same sad the second time...maybe even worse. I just found out mine broke his ankle last week, which wouldn't be a big deal if he weren't in Ethiopia, with questionable emergency care. Or any care for that matter. I would imagine they bound it up with cardboard and goat hair and kept on tracting. Bless their man-boy hearts. So glad to be in the same club as you.

Congratulations to your son. I never had to do this but I am sending my nephew to Argentina.

Awe you gave me goosebumps as I remember those days well. I sent a son to Croatia and one to Mexico. Really, truthfully speaking, both missions flew by - I guess I was busy with the rest of life to dwell on the fact they were gone - but come Monday the computer was mine as I would sit and wait for the email and hang on every word of their letter absorbing and taking it all in - It was the only thing that got me through the week.

Hang in there your boy is going to be the BEST missionary out there!

My husband and 17-year-old-son think it is silly that mom's feel this way and it makes me annoyed with their lack of empathy. I worry about how I'm going to take it when my son leaves on his mission not so very far from now.
A woman in my ward had been crying at church over missing her missionary and that night as we were getting ready for family prayer my husband was kneeling by our bed stretching himself over the blankets and said, "You know what I would miss if it went away for two years? This mattress." Men.

Even if my husband and son don't I want you to know I'm feeling for you. Go mom!

Hubby and I calculated it. There is a slim chance that we could have three kids on a mission (for a very brief time) at the SAME time.

I remember when my hubby was posted outstation, I just could not focus on my day job nor could I sleep well. Finally, he gifted me a love doll to make me comfortable in the night. I wonder why darkness makes you more lonely and wanting.