How to not catch a rat.

Some of you may recall our rat.  Not the cute kind of rat that wears a chefs hat and knows how to cook.  But the kind of rat that lives in your kitchen, eats your food and creeps you out just knowing it's around somewhere.  Watching. Waiting.  We tried the humane traps.  Then with no success we moved on to the "snap, yuck" traps.  Nothing.  We thought he was gone.  We got comfortable again.  We left our bananas on the kitchen counter. Vulnerable and alone.  They never saw it coming. We woke up a few mornings ago to see the familiar hole chewed in the side of one of the bananas.  HE was back.  Or he had never left. Shiver.

Whatever.  He was immune to our human made traps.  He was smarter than us.  Obviously.  And he had to prove it once more.  Our dog had to this point been useless.  If the rat had looked like a shoe or smelled like cheese he would not have had a chance.  But it seemed our Westie, Rex,  was oblivious to any rodent moving in on his turf.  But the other night at about 10 pm Rex finally turned into the hunter that would have made his ancestors proud.  He had been digging around the bottom of the cabinets on the island in the kitchen.  Maybe he had found a gold mine of crumbs.

I was upstairs when I heard my husband squeal like a little girl and shouting at the dog.  We all ran to the kitchen to learn that Rex had finally rooted out that rat, chased him across the kitchen and into the family room.  The rat used his smaller size to his advantage and slipped under and inside our large stuffed chair.
We know knew where he was and he was not getting away without a fight.

First my husband handed everyone a large plastic bowl.  Because everyone knows that should be your first arm of defense against a rat.  I guess we were supposed to trap it under the bowl when he came running out from under the chair.  That would have been difficult from on top of the chair I was standing on.  I was not about to put my feet on the floor while there was chance a rat would coming running towards me. 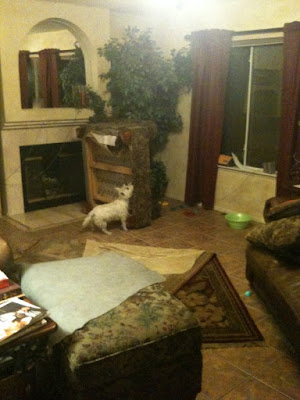 The rat aftermath.  My chair defaced.  Carpet turned over.
And Rex still sniffing him out after he was long gone.
My husband was now in hunter mode along with the dog.  They both circled the chair wondering how to get the rodent out.  He tipped the chair on it's side.  We could hear the rat scurrying inside the char, under the bottom interfacing.  So only one thing to do.  Cut up my chair.  My husband proceeded to cut the bottom interfacing off my chair.  Sure.  Deface my furniture for the sake of the hunt.

While we were still armed with our plastic popcorn bowls and one kid with a blanket, hubby shook the chair and the rat came running out and under the couch.  Hunter Man then armed himself with the blanket to throw over the rat as my son flushed him out from under the couch with a broom.  Then there was screaming, yelling, squealing as the blanket trap actually worked.  For about 5 seconds.  The rat escaped out of the iron clad blanket plan and ran straight out the doggie door.  Holy Crap.

My house was a wreck and the rat is now living it up pool-side.

Email ThisBlogThis!Share to TwitterShare to FacebookShare to Pinterest
Labels: rat

Good boy, Rex!!!!
I'd have been exactly where you were...up on the chair. I don't want any little thing running over the tops of my feet!!!! Now if you can just find the little rodent a nice cabana boy for the poolside partying!!!!

Glad Rex came through. Hope you scared the rat away for good.

Holy crap I'm freaking out thinking about it! Ugh! Doggy door...the rat will be back.

The plastic bowl defense is classic. I use that with burglars and murderers, too. Seems to do the trick. :)

I'm shivering from here! Nothing makes me gag more than rodents in my house! I hope he's gone for good!! (Though let's face it, I doubt it)

Eeek! That totally creeps me out. Thank goodness for dogs and husbands!

I'm gonna gag!
Mouse is awful.
Rat is nastiness to the MAX!

When the rat starts asking for the cabana boy it's time to evict him from poolside.

ugh - not sure I can handle rats when they're not whipping up some delicious gourmet meals.

One time my son actually got bitten by a rat - true story - we called the health department and everything FREAKED out about the possible diseases and infections. Son was fine. Rat turned up dead 2 days later just outside our fence. Good reminder to never bite my kids.

I love that a rat can make even the manliest of men squeal like a little girl and run around wielding a bowl and blanket. And this reminds me of a poem I would like to share:

EEEWWWW! Dang rat! Maybe it's time to lock up the doggie door so he doesn't come back inside and help himself to the comforts of your home.

Ah yes! Brings back memories of cutting the fabric away from the arm of my couch to get the guinea pig out! (I hated that couch anyway and loved that guinea pig!) But a rat! Eww! I'd have used poison and locked the dog up for a few days! Hope he doesn't return!!

Poor rat. Being so mistreated buy giants must be so tough.

I sure hope you get that nasty little thing gone forever!

Time for a little deep cleaning, you never know what that critter did to your chair in the heat of panic!

What a good doggie you have!

This was funny. I could just picture it all. Hope everything got put back together. I think I would seal up the doggie door. That is just too creepy.
Once we had a rat in our attic. Tom put in a trap and got it. SNAP. I told my students at school what happened and one was upset because I had killed one of God's creatures. (I don't consider rats in that category)

OMG! Rats are the grossest! I have serious issues...now, I fear sitting on my chair because I worry there are rodents inside! So glad you guys got him out of the house!!!

Ah man I was hoping for success! Hopefully he will stay outside.

I would have been up on the chair too.

AAAAAAAAAAAAAAFCCCCCKKKKKKKKK!! I'm dyin, DYING over here! You have just described one of my greatest fears EVER! Rodents of any kind are just to freaking gross for me. So, I'm glad you flushed him out, and I certainly hope he's really gone. But something tells me, he will find hisway back in, they always do.

ACK!!!! I hate rats, rodents, furry anythings!
Hi-lar-ee-ous! I'm glad he's gone. But he knows how to get back in, eh?
Duct tape the doggie door!

Rat in your couch! I would have a hard time sitting on it again. I'm sorry. I hope he learned his lesson and stays outside this time.

Is the rat the real reason you're moving into a new house?

SO SO funny . . . although, I'm sure NOT funny to you! But I died laughing when you mentioned the plastic bowl, because that was my weapon of choice years ago when we had a Mickey (mouse) visiting our house years ago. Seriously - what did I think I would do with the plastic bowl? So glad you rat is gone!!!

Oh geez! Let's hope that darn rat doesn't end up sneaking back into your house. My husband hates rats too, I'm usually the warrior when we're faced with one. It's pretty hilarious too and there are squeals like a little girl, and it's not from me.

{shudder} He went out the door...Could he come back through it too??

Oh my! What a funny story well, probably not so much to you :)

We chased a mouse in our other house into a closet and one by one removed things until it had nowhere to hide. Then Jared shot it with a pellet gun. It was awesome.

I'm laughing and shuddering at the same time! We had a similar situation with a mouse in our dorm when I was in college -- LOTS of screaming and squealing. But yours is more fun because your husband screamed like a girl. ;-)

I am now having a panic attack. This is my worst nightmare. Our neighbors recently informed us that we have a colony of sewer sized rats living in the rocks around our house. I no longer let my children out to play.