LOST; An island with PMS

It all came to me as I was watching the finale of LOST.

Now, for the past year I was definitely a fair weather fan.  I had to think too much as watching it. I like my TV to keep me dumb.  I felt like LOST must be smarter than me and I gave up on it for awhile.  But I could not let it go without a good-bye since I did follow these people for 5 years.  And last summer I got to stand on beaches where they film LOST.  I saw the village where the OTHERS lived (a YMCA camp, takes a little of the spooky out huh?) and decided I needed to visit those beaches again.  So I recorded the 12 million hours of the final night.  I watched the 2 hour review and amazingly the clouds parted and I felt caught up and prepared for the  "The End". 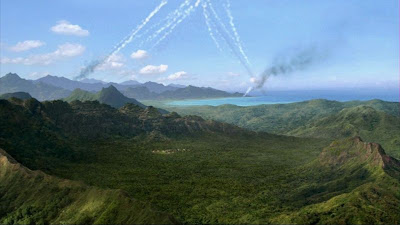 I saw them continue to fight with this island.  And then it came to me.  As Jack and Desmond were at the heart of the island where the light was, and they were fooling around with it's "cork" , pulling it out, then putting it back in, watching the island get cranky, then be happy again, it came to me.  The island was just a big cranky, PMSing woman.  Now I am not one to disparage my own sex but you all know what I am talking about.  She blew smoke, and swallowed people whole.  She drew people to her then pushed them away.  Her "center" was alluring and all light and glowy but if you got close you got burned.

They could have solved their problems much quicker had they known that.  All they needed was some Diet Coke and some chocolate and maybe some potato chips for good measure.  Take it to the "heart" of the island and throw it in.  And in about a week they would have had an island calm enough to open a resort on.  At lest for the next 28 days.
Posted by See Mom Smile at 10:14 PM

So that's what it was all about, huh? I never watched beyond the first few episodes of the first season. An island with PMS... that's quality television I tell you! My island would have to have cherry coke instead of diet. Just for the record. :)

So funny! I never even watched a single episode, but reading your review makes me wish I had now!

And now we know. I watched about half of the first season. I don't ever have to watch again, now that I know the truth :)

I was never interested in Lost. I am "lost" too much in reality to have to watch a show about being lost.

I had to give up on LOST awile ago. I just couldn't keep up with it and other shows grabbed my interest.

Love the analogy! I loved this show and I will sincerely miss it... and all its crazy characters. Especially Sawyer. YUM.

Makes me wish I'd actually watched it. I, too, like my TV to keep me dumb...barefoot and pregnant. But now that the pregnancy is no longer viable, and my feet crack and bleed when I go barefoot, I'm left with just dumb. So I watch reruns of Three's Company.

I love LOST! I've been with them from the very beginning and the finale brough tears to my eyes because it was like a friend to me. Haha! I even got to see them film a few times, I mean, they were always out there in the public filming away in Hawaii, so who didn't.
Great analogy about the PMS and that's pretty hilarious too. Now that I think about it, maybe that's what it was about the 'entire' time. Hmmmm.....
Have a great day sister!

I've never watched it, 'cause I figured I would be Lost since I missed the first season. But I'm so glad you informed me what it was REALLY all about. Now I can speak with authority on the subject when it comes up. I guess I better get dressed and go to Walmart. I'll lurk and jump in with this magnificent theory as soon as I hear anyone talking about it...

I didn't watch Lost for the same reason - too much thinking. But sure do feel like that island you're describing today.

Hahaha!! There you go!

Have fun a CBC!

Of course!!! It all makes sense now! Hahaha. That is flippin' hilarious!

I feel "Lost" that I totally missed this post. What happened? It was a school night...bloomin' heck.