The big fruit of my loins

This post is just a big excuse to post pictures of my baby boy.  Yes I have 5 other pieces of loin fruit but today he is my favorite. 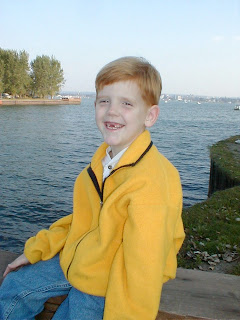 You know how when you have a lot of little kids running around and older mothers look at you and say "Oh just enjoy it when they are young.  They grow up too fast."  Well I thought they were nuts.  Enjoy what?  The poop diapers, no sleep, sticky floors, clothes that smell like spit-up? I  did enjoy my kids when they were little but it was HARD! (said in whining voice).  Now it's not like I am retired from parenting.  I still have a 5 year old terrorist in the house but I really do enjoy my older kids.  I don't have to wipe their bums,  hold the tissue while they blow,  make sure their clothes match or use  my momma  spit on their juice mustaches.

My oldest man/boy is 16.  There are lots of things that I like about him.

*He drives his sister to early morning seminary at 6 am and then to school and then home again.  And he lets me pay for his gas money.  Isn't that sweet?

* He has only been on one date since he turned 16.  And that one was girl's choice. His hormones are still in check (Yes, he likes girls.  He likes them A LOT! He's just not sure what to do with them yet)

* I can have a conversation with him.  That does not mean there is not the teenage rolling of the eyes and the "oh mom you are so dumb" looks on his face, but he does listen to me.

* I don't have to tell him to bathe, brush his teeth or wear clean socks everyday.

* He still tolerates my hugs and kisses.

The things that make me sad...

* He is taller than me and still growing.

* He can eat an entire box of cheese crackers in one sitting.

* He is stronger than me. And he knows it.

* He voice sounds like his dads.  I hear him talking downstairs and I think my hubby is home. Nope, it is just my man/boy that sounds like him.

*He still lets me buy his clothes and says he likes them even when he doesn't.

* He tolerates my hug and kisses.

On Sunday he had to put on a tuxedo to give an announcement in church about an upcoming formal dance.  He then handed each girl a rose, in true "The Bachelor" style.  (Though he could make a better decision than The Bachelor, with his eyes closed.  But that is a whole other blog) 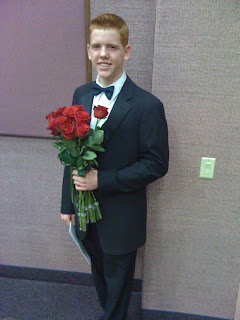 sweet. also. does he know you just blogged about his one and only date?

Right now...I can only imagine. Guess I better not blink huh?

What a sweet post! Two out of my four boys are "Gingy" kids just like yours. :o) I used to think parenting wouldn't be nearly as fun once the boys were out of their sweet cuddly baby phase but I love it now, too. They are becoming such interesting people and some of my very best friends.

Another great blog and I especially enjoyed the photo of him with the roses.... I wonder who took that?

What a great looking (young) man. Thanks so much for visiting my blog on my SITS day and leaving your sweet comment! I loved having you over. Come back anytime and let me see your sweet name again!

What good looking young men!
That was so cute!
And as much as I love my babies, I will be happy when I never have to potty train again!

Oh I wish they would done that when I was a kid. I would have loved to get a rose handed to me by a nice handsome guy! Lucky girls!

Thank you for stopping by my blog. I am now following you too. I love your profile! hehe.

So my man'boy just read this and his only comment was, "you want me to wear clean socks everyday?" Sigh. I take it all back...

darling!!! He's a great guy. Thanks for the post. Love, Joy

How sweet! I love his red hair.

Remember me? I used to be the oldest. Ya um, and I drove Brandon around everywhere before he could touch a steering wheel, or knew what girls were. Soooo you loved me first. Just sayin'. :)