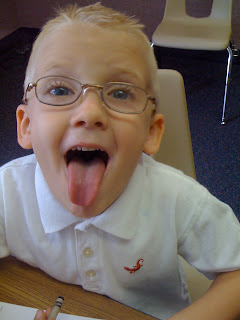 My kid is the one that had this conversation with the pre-school teacher (they call it Jr. Kindergarten but until they keep him all day, everyday, it is just pre-school):

Other kid in class says,  What the hell?
Teacher over hears other kid and asks a rhetorical, What did you say?
My kid, thinking the teacher really did want to know, answers,     He said 'what the hell'

My kid is only five and the youngest of six kids and his entire life goal is self-preservation.  He fights with his brothers, the dogs and to get the fruit snack bag open.  But being the baby, he gets away with a lot.  I am tired.  His dad his tired.

Just  give him what he wants so he'll stop screaming!

Even the teenagers, who give their opinions freely, think they could do a better job raising him. Some days I think maybe they could too.

I love THAT kid! That picture of him puts a big smile on my face every time I see it.

How can you get mad at a face like that? Sooo cute! We must be realated, cause I aways have my tongue out too! It helps me concentrate!