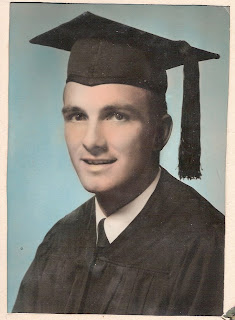 I proclaimed my ignorance recently in a blog,  in not knowing the differnce between  lay, lie, laid, lain and every form thereof.   So, leave it to my dad to set me straight.  Not in an obnoxious way, but in a dad way and in a reference librarian way, that I am sooo used to and have come to expect.   I got the following email under the title of "a little help."

I loved your blog.


Lay means "to place something down." It is something you do to something else. It is a transitive verb.


Lie means "to recline" or "be placed." It does not act on anything or anyone else. It is an intransitive verb.

Examples: I could have lain in bed all day.They have laid an average of 500 feet of sewer line a day.


Layed is a misspelling and does not exist. Use laid.


So I read it and thought, thanks for the little bit of help Dad.   Those definitions are clear as mud and are why English is the hardest language to learn, apparently even for English speakers like moi.

And that email is one of the reasons I love my dad.  He is a retired college reference librarian (Fresno State-Go Bulldogs!) and an avid reader.   He knows everything and always has.  And if does not know it, he knows where to find it.

From my earliest memories, my favorite thing to do with my dad was go  to the library.  He would check out his dozen books, that he could read in a week (no exaggeration). The fun trips were to the college libray after hours and my brothers and I would run through the stacks.  Dark, scary, creepy.  A little sisters worst nightmare which my brothers took full advantage of.

It was  in about Jr High I really discovered how to take advantage of my dad's  job.

Hey dad, I have this report due... and I would have a dozen books on the kitchen table by dinnertime.

Then there was watching Jeopardy with him or playing Trivial Pursuit.


He could have made us millions on Jeopardy and today everyone would be saying Ken Jennings who?
But he said he would be too nervous to push the clicker.  Which, if you have seen Jeopordy, can be a real issue for even the smartest person.

And now in 2010 he has easily brought his skills into the digital age.  He is now a  Mac, iPhone, techno geek.  So now he can get the same info, just way faster.

And it is a joy to see the system being worked, in the next generation.
Mom, I have this report...
Call your Grandpa.
Posted by See Mom Smile at 10:17 AM

I agree that he is such an awesome man! He was the bishop of our student ward at TVA. He was more like the grandpa of the ward. He truly loved us all. He was our dad away from home. He knew the name of EVERY child in the ward and could tell you every baby born into the ward during his time as bishop. It was such a sad day to see him go, but I'm sure his family is happy to have him back.
You're so lucky to have him as your father!

I read that facebook comment and was going to add my "here here" to the fact that I cannot use those words correctly.

I think I will print out what he has written and carry it with me so I can get it right the next time or at least share the info with Emily. It may be on the SAT. ;)

Grandpa's the best! That's why we love him. I see so much of Grandpa in my Dad.

I too have memories of running through the stacks when we'd come to visit.

It is amazing how much my dad is like grandpa. Some of my favorite memories is going to the library with my dad too!! Love the Clark family!