So, I hit my husbands car this morning... 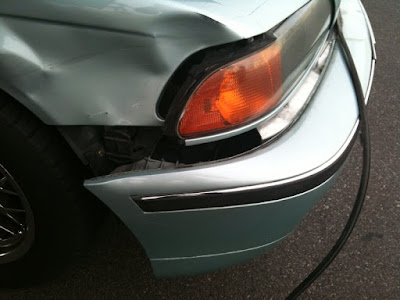 It was going to be a good Friday. All the kids were going to be in school all day and I had a date with the MAC counter at Nordstroms.  The kids were actually in good moods.  There was no WWF going on and "show-n-tells" were stuffed safely in their backpacks.

I was pulling out of the driveway, looking in 12 different directions when my bully of an SUV decided to pick on a car half  it's size. (Note the way I shift responsibility to the car).


His baby car started wailing its car alarm while mine sat astonished.  I slowly backed up and unhinged the kissing bumpers.  While leaving my engine running I surveyed the damage.  Yikes.  I don't know much about cars but I do know bumpers should not hang like that.   Several pieces of it lay sadly on the ground along with some of parking light to keep it company.  And then there was the dent.  Double yikes.

My big bully of a car however, maintained only a small scratch and slight dishevelment to the bumper.

In my defense, his car was parked backwards and his bumper was sticking out. (Responsibility shift #2)
And, his car was usually not there in the morning (and #3).

So with my husband still in the house, I did what any loving wife would do after she hit her husband's car.  I drove away.  I drove away fast.  Hit and run.

With the 12 year old saying "dad is going to be mad", I called him.

Hi honey.  You know how much you love me and how when you put things in perspective the little things don't really matter much in the grand scheme of things.  (Kids are giggling in the backseat, waiting in anticipation, to hear mom get chewed out).

Get to the point.

I hit your car.

He did not yell. I kept saying I was sorry.

I have been in accidents before. I once rear-ended a lady, who was so mean, the policeman told her to shut up.

At least I can sleep with this guy and maybe he won't call the cops, or my insurance!
Posted by See Mom Smile at 10:10 AM

LOL! Oh man, you sure have an awesome way with words.
But that big ole' mean Suburban, he needs a talkin' too! Picking on poor innocent little cars like that.

We will probably have to turn in our sweet honda Pilot for a bully suburban whenever the next baby comes along. Which won't be for a while, I'm just saying.

And don't worry, I wasn't at all upset when you called my baby girl a boy in your comment. The blue shirt, the short hair from her surgery... it does make her look kind of boyish. I should know by now that I need to keep a bow in her hair. but I always forget!

Oh my gosh Serene, forgive me. Remember I have just been in a major car wreck. I will make up for it.

I don't want to be accused of being a blog stalker so I am leaving a comment;) I love reading your blog which always brings a smile and mostly laughter. I am sure that you wish you could take a Do Over. Unfortunately I wish that for myself all of the time.

Linda you are hilarious!! I love the way you write and describe things!!! We should have laughed more in college together instead of thinking about stinky boys!! Hey I have a blog too - if you are interested send me your email on FB and I can invite you to my blog (its private)

Great way to start an apology! Have a good Friday anyway...remember that your hubby loves you more than his car.

One of the reasons I won't drive Don's car is because I don't want to be responsible for even the slightest scratch. Ouch!

LOL! No worries. I just need to learn to stop dressing her in blue without a hair bow!

Eeek! Glad he wasn't too mad. My husband plowed into my mom's car when we were on our way to the hospital to have our most recent baby. She had come over to stay with the other boys and Joe did quite a bit of damage! Thank God we gave her a new grandson to make up for it!

I was in a minor accident back in college with this really cute baseball player. He rearended my brand new Isuzu Imark that I worked and paid for myself! But he was cute and in uniform, so not only did I not call his insurance, I married him!! So just keep smiling and be your usual funny self and I'm sure hubby won't stay mad long:)

I banged up my car a little once and when I told my husband he was angelic and said, "Well....I guess I'll just get good at panel beating." Sigh.

I backed into my son's HUGH pick up and I tried to blame him for parking so close. I didn't buy it either and there was no way I could say I didn't see it. Sometimes, things just happen, when will these men understand that?